The Final Report on the review of Australia’s Personal Property Securities Act (PPSA) was tabled before Parliament on 18 March 2015.  (It was written by Bruce Whittaker, Partner, Ashurst.) 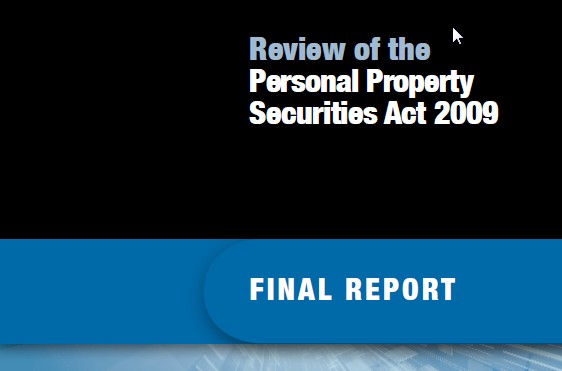 …. The Personal Property Securities Act 2009 (referred to in this report as the Act) has improved consistency in Australia’s secured transactions laws, but submissions emphasised that the Act and the Register are far too complex and that their meaning is often unclear, and that the resultant uncertainty has not allowed the Act to reach its potential…. …. Much can be done to improve the Act. The Act is significantly longer than the corresponding legislation in other jurisdictions, and while some of that additional length is attributable to constitutional or other machinery provisions, much of it flows from the very prescriptive nature of some of the drafting, and from the inclusion of additional provisions that may be of only marginal benefit…. …. There is no one single step that by itself will produce a major improvement to the Act. Rather, improvement needs to come from the making of many small changes…. …. The reforms introduced by the Act will only realise their objectives if the people that it affects are aware of it, and understand how it affects them. Government went to considerable efforts to raise awareness of the Act around the time that the Act was passed, but general awareness of the Act appears to have remained low, and the complexity and unfamiliarity of the content of the Act have meant that many do not know how to work with it….

There are 394 recommendations in the Final Report.  They appear in a table  in Annexure E, beginning at page 502 of the report.  DOWNLOAD: The full report is available for download at this AG department website.

Non-compliance with the Act

As someone who believes that our laws must be drafted using plain writing skills, and as one of those who felt strongly and said from the start that the  Personal Properties Securities Act 2009 was far too complex and confusing for the vast majority of people to understand (and hence, badly written), the Report’s comments to this effect are worth repeating here.  They appear under the heading  “3.2.3  Causes of non-compliance with the Act”:

The lack of awareness and understanding of the Act among users is also the primary reason why businesses are failing to comply with it. A person who is not aware of the existence of the Act, or of the fact that it could apply to them, is most unlikely to be operating in a manner that is consistent with the rules set out in the Act, particularly as those rules are very different in some critical respects to the laws that preceded them. Similarly, even people who are aware of the Act and of the fact that it affects them are often failing to comply with its rules because they do not understand those rules properly. One submission from the rural sector observed, for example, that the Act:

has not achieved a clear and appropriate outcome for small business; rather it has created a raft of uncertainty, misrepresentation and total confusion for all small business operators in Rural Australia.

The extracts from submissions that are set out above in Section 3.1.2 all make the same point: that the Act and the Register are far too complex. This was a consistent theme across the submissions as a whole.

The Act deals with a complex area of the law – one that traverses our entire economy, and that manifests itself in different sectors of the economy in very many different ways. The area does not lend itself to one simple set of rules, and the Act will always be complex. The submissions demonstrated, however, that the Act is more complex than it needs to be. In my view, a number of factors have contributed to this outcome.

First, as noted earlier, many of the concepts and much of the terminology in the Act have been adopted from overseas models. Those models were not created in a legal vacuum, but were founded in and based on the substance of the legal systems for which they were developed. In particular, while Article 9 of the Uniform Commercial Code in the United States was regarded as revolutionary in the way that it created a standard set of rules for all types of security interests, it was also very much a creature of the state of law and commercial practice in the United States at the time it was developed. Clearly, the economic structures and legal systems in Australia in the early 21st century are very different to those that prevailed in the United States in the middle of the previous century. As a result, terminology and concepts that made sense and were relevant for Article 9 as part of United States law will not necessarily make the same sense, or have the same relevance, in the Act as a component of current Australian law.

Secondly, it appears that the architects of the Act may have tried too hard to be helpful. The Act is far longer than its Canadian and New Zealand counterparts, even allowing for the additional provisions that were included to accommodate constitutional and other machinery requirements. The developers of the Act appear to have endeavoured to produce a “best of breed” piece of personal property securities legislation, by picking out the best elements of the offshore models and then adding additional detail in an effort to explain more clearly exactly what is required. Rather than helping Australian businesses, however, this had the effect of creating very specific and detailed operational requirements. It limited flexibility and required changes to operating practices in order to align them with the structures required by the new rules.

The third main factor that has led to this situation, in my view, is that the development of the Act appears to have been approached as a design process, too divorced from the realities of the marketplace that it was designed for. While Government did provide the business and legal community with opportunities to comment on drafts of the legislation, the sense of many of those who were involved in the consultation process was that input from the business and legal community was not sufficiently incorporated into the policy design and the detailed drafting. As a result, there is a misalignment in some areas between the policy and drafting of the Act on the one hand, and the operating realities of the Australian business environment on the other. This has created confusion and uncertainty, rather than clarity and certainty.

This is not intended to reflect adversely on the individuals involved in the actual drafting of the Act, or those who instructed them. Rather, it is a reflection of the magnitude and complexity of the task.

Whatever the reasons for the confusions and complexities in the Act, they have made the Act very hard to understand and to work with, not just for businesses but even for legal specialists as well. This is exacerbated by the fact that the complexities compound each other – unfamiliar terms and uncertain concepts are used in complex provisions, in a way that can make it even more difficult to determine how those complex provisions inter-relate with each other. The cumulative effect is that the Act can be very difficult to understand and to work with.

It is clear that much can and should be done to streamline the Act, and to align it more closely with the realities of the marketplace that it applies to. That is the subject of Chapters 4 to 9 of this report.

The big challenge for amendments to the Act that are made as a result of the Final Report is that they make the Act and its practical application much easier to understand.

The Personal Properties Securities (PPS) Register in Australia is scheduled to open for business on 31 October 2011.  The PPS Register will be an electronic data file stored on government computers and accessible via the internet.  (Access and usage conditions and fees will apply.)

A personal property security exists when a company, individual or other entity takes an interest in personal property as security for a loan or other obligation, or enters into a transaction that involves the supply of secured finance.   This can include individuals or companies who are involved in: taking fixed and floating charges; long term and finance leases; chattel mortgages; retention of title arrangements; commercial consignments, and factoring.

Personal property is any form of property other than land, buildings or fixtures which form a part of that land.  It can include tangibles such as cars, art, machinery and crops; as well as intangibles such as intellectual property and contract rights.  (In PPS parlance an item of personal property that is pledged by its owner as security for repayment of a liability is sometimes called “collateral”.)

Where there are multiple, competing or conflicting claims over personal property, the default and specific priority rules set out in the PPS Act come into play.  These are complex.  But in many cases the timing of the registration on the PPS Register will affect the order of priority, or ranking, of a claim.

Many of the existing registers maintained by state and territory governments and the Australian Government will be closed.  These include ASIC’s Register of Company Charges, motor vehicle securities and bills of sale registers.  The interests of secured parties recorded in such registers will be moved automatically across to the PPS Register, without the secured party having to do anything.

Disclaimer: This document provides general information about the operation of the PPS system and does not constitute legal advice. You should seek legal or other professional advice to consider the application of PPS to your individual circumstances.