A Federal Government report on compliance by insolvency practitioners who work in the field of personal bankruptcy and insolvency, and are governed under the Bankruptcy Act 1966, was released on 16 January 2014. The 29 page report, published by Australian Financial Security Authority (AFSA), is titled

A list of the CONTENTS is published below. For a copy of the report (PDF) CLICK HERE. 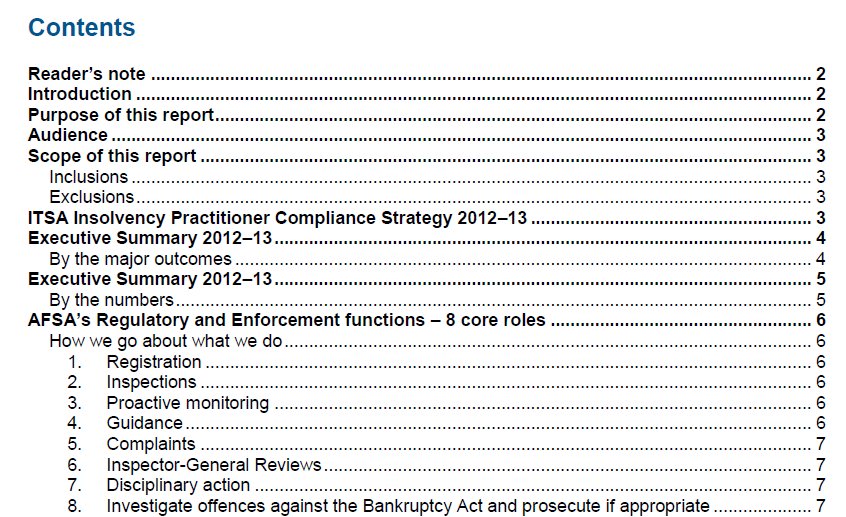 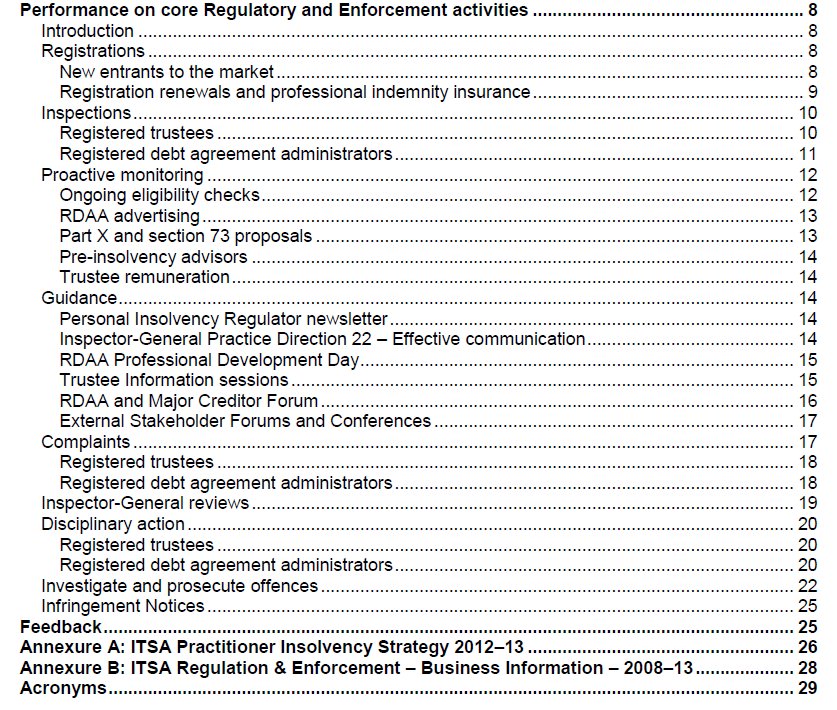 I have created a directory facility for insolvency practitioners, lawyers and other consultants that provide specialist insolvency and recovery services (corporate and personal) to list their names and contact details.  This facility is available free of charge and obligation free until 30 June 2014.

Then on “Submit a Listing”, and follow the prompts.  You will be asked to enter your category of service, business name, location, phone number, and a description of your services.  You can also supply certain other information if you like, such as your web site address.

Visitors will be able search the directory by business name, category of service, location, etc.

Encouraging news.  According to an article published on insolvencynews.com on 9 January 2014, the United Kingdom insolvency authority has banned the directors of two unrelated companies from acting as company directors for failing to maintain adequate accounting records:

“The directors of two unrelated companies have been banned from acting as company directors for failing to maintain adequate accounting records.

The disqualifications, which followed investigations by The (UK) Insolvency Service, were handed to Bradley Carter of Dr Spafish Limited, and Alan Coffey of Datadesk Computer Services Limited.

Carter, whose company offered fish pedicures and also sold franchises, was banned for seven years. Spafish began trading in August 2010 and went into liquidation on 28 November 2011, owing £788,968 to creditors.

The investigation found that due to the lack of available accounting records, it was unable to determine the company’s turnover, who benefitted from cheques and cash worth £181,953 withdrawn from the company’s bank account, and what happened to £68,100 received as part payments for franchise.

Neither was it possible for the investigation to determine the full extent of losses incurred by customers or who these customers were.

“This director failed to do this and there remain a large number of unexplained transactions, representing significant amounts, over the company’s trading period.”

Coffery of Datadesk Computer Services, which operated as supplier of office and technology equipment, was also disqualified for seven years, at Airdrie Sheriff Court in Scotland.

The investigation found that the lack of proper accounting records meant it was not possible to verify if £312,266 paid out of the bank account was for the benefit of the company.

This included over £123,141 paid to a company which holds petroleum exploration and extraction rights in Sierra Leone, West Africa and £26,000 paid for the purchase of coffee and related products. In addition, there were unexplained cheque payments totalling £79,038.

The company entered liquidation on 3 February 2012.

Robert Clarke, head of insolvent investigations north, at The Insolvency Service, said: “The lack of records in this case made it impossible to determine whether there was other, more serious, misconduct at Datadesk and that is reflected in the lengthy period of disqualification.”

In a notice to members, Denise North, current CEO of IPAA/ARITA, said she was “delighted to report that our new name and brand are now in place” and invited members to visit the association at arita.com.au

ARITA is being described as “the peak professional body in Australia for company liquidators, bankruptcy trustees, lawyers, financiers and academics involved in restructuring, insolvency and turnaround activity. It provides advice and assistance to its members on insolvency law and practice, gives advice to government on law reform, and generally represents the interests of those in the insolvency profession.”

John Winter’s career and specialities are detailed on his LinkedIn page.