The Australian Insolvency Practitioners Association (IPA) today released the third edition of its Code of Professional Practice, together with a new Explanatory Memorandum, a document showing all changes, and four templates for insolvency practitioners to use as guides when preparing such documents for creditors. 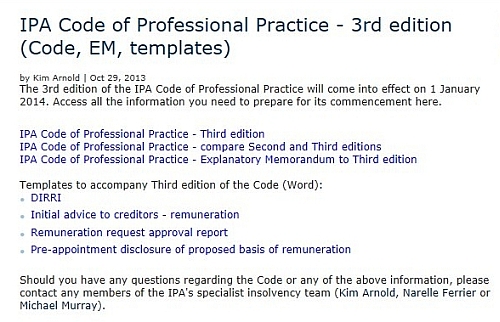 The Australian Manufacturing Workers’ Union (AMWU) has focused its recent submission to the inquiry by the Australian Senate into “The performance of the Australian Securities and Investments Commission” on the issue of phoenix company activity.

The AMWU claims that “ASIC’s failure to adequately hold directors to account has cost millions of dollars worth of unpaid entitlements for employees nationwide. The time is now for action to be taken, impunity to end, and for unscrupulous directors to be held accountable.”

1) Increasing resources and funding to ASIC so that it can properly investigate corporate misbehaviour.

2) A comprehensive review and amendment of s 596AB of the Corporations Act to provide stronger safeguards for employee entitlements and allow for more successful actions by ASIC and liquidators.

3) Introducing a reverse onus procedure by which a director, where there has been an adverse liquidators’ report lodged against them, will be required to ensure that they have acted honestly and responsibly in relation to company affairs.

In expanding on and explaining these recommendations the AMWU says:

1) “ASIC is under-resourced to handle the thousands of complaints submitted to it every year. Regardless of what legislative or regulatory reforms are undertaken, without additionally funding, ASIC will not be able to protect the interests of even the most vulnerable of parties, such as employees. There needs to be a commitment to replace impunity with accountability, and increased resources and funding to ASIC must be the driving force behind this.”

2) “The intention behind s 596AB was to “deter the misuse of company structures … to avoid the payment of amounts to employees that they are entitled to prove for on liquidation of their employer”. This intention has not materialised. Instead, the criticism that s 596AB will prove to be a “toothless tiger… so hard to prove that nobody will be effectively prosecuted” has been proven true. This recommendation would allow for ASIC to, more easily, bring proceedings against directors who have compromised employee entitlements through corporate restructures. This would have a threefold effect of protecting employee entitlements, holding dishonest directors to account, and deterring similar conduct.”

3) “This recommendation is modelled upon Irish legislation under the Companies Act 1990 (Ireland) s 149. In Ireland, where an adverse liquidators’ report has been lodged, directors must ensure that a large amount of equity capital is invested in the new company (at least £100 000 with a minimum of £20 000 paid up in cash) or are required to prove in court why they should not be required to do so. This reverse onus procedure would reduce the detection and compliance burden on ASIC.”

4) “The AMWU submits that continued review of the anti-phoenix activity measures implemented be undertaken, especially in light of the first anniversary of the enactment of the Corporations Amendment (Phoenixing and Other Measures) Act 2012 (Cth).”

In support of its submission the AMWU gives its summary of the following recent cases:

The inquiry by the Senate Standing Committee on Economics began on 20 June 2013. Submissions were to close on 21 October 2013. The Committee is due to report by 31 March 2014.

Before accepting an appointment as liquidator or administrator of an insolvent company the insolvency practitioner (IP) must evaluate his or her relationships with the company and with those who are involved or have an interest in its affairs. In the following decision chart and accompanying notes I suggest that there are three main steps in the evaluation process.

Step 1 is fairly simple: the task is to ensure that the IP is not prohibited or disqualified from acting by the express laws on disqualification for reason of a specific connection that are contained in the Corporations Act 2001 (the Act), i.e., sections 448C and 532.

Step 3 in the evaluation process is required if the IP considers that there is a relevant relationship. Relevant relationships need to be evaluated to see whether they give rise to, or are likely to give rise to, a conflict of interest or a conflict of duty for the IP in the performance of his or her obligations. This is a complex issue, which is expanded upon in Note 3.

If the IP forms the view that because of a relevant relationship he or she has or is likely to have a conflict of interest or a conflict of duty, he or she must decline to take the appointment.

On the other hand, if the IP’s view is that there is no such conflict, the IP must – in the written Declaration of Relevant Relationships – give details of the relationship and explain why he or she believes that it does not and will not give rise to a conflict of interest or a conflict of duty. 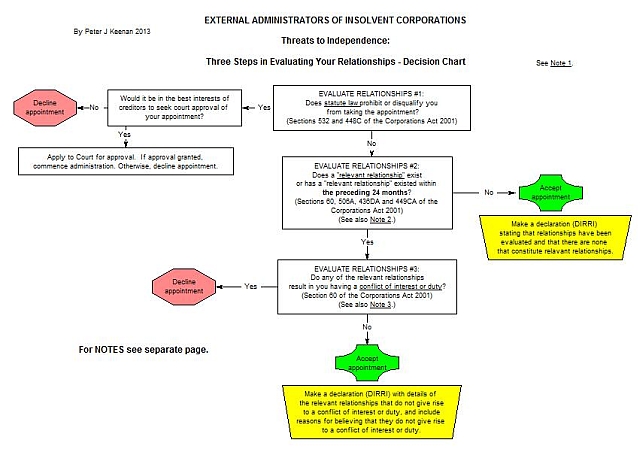 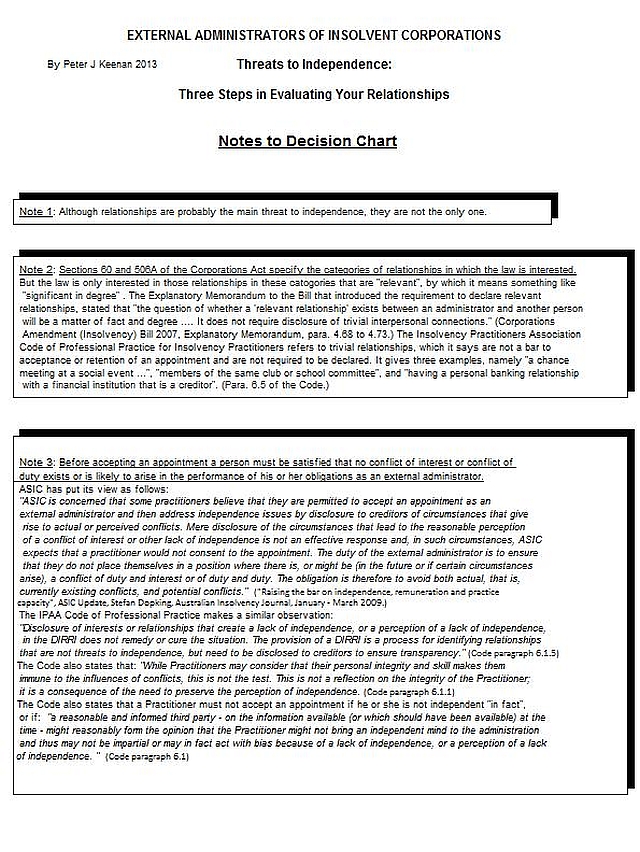