The Senate Committee established to inquire into “Insolvency in the Australian construction industry” – which is code for illegal phoenix activity in the construction industry – has received written submissions from industry bodies, unions, contractors associations, superannuation funds, insolvency practitioners, the ATO and the ASIC. A total of 18 submissions were received and are available for download from the Parliament of Australia website. Below is a screenshot of the list of submissions. 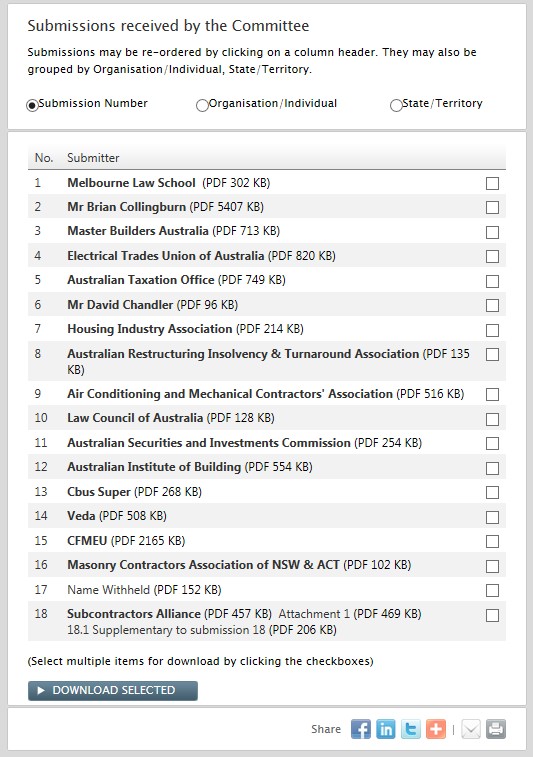 On 31 March 2012 Mr Hull received a total of $21,175.44 from the sale of two parcels of shares authorised for sale on 26 March 2012. On 10 April 2012 he became bankrupt via Debtor’s Petition, by which time he had disposed of monies totalling $16,000 received from the sale of shares. In his Statement of Affairs completed on 5 April 2014, Mr Hull failed to disclose the sale of the two parcels of shares, and failed to disclose the existence of the bank account into which the share proceeds were subsequently deposited.

During the proceedings Magistrate Milledge remarked that the offending was “quite deceitful and very worrying”. She later stated that the offending was “despicable, mean and criminal”, but acknowledged that it was clear that Mr Hull accepted that as demonstrated in his letter to the court. In passing sentence, Magistrate Milledge gave consideration to Mr Hull’s age at the date of the offending; the fact that he had previously managed to lead a trouble free life; and that his recent efforts to repay the monies showed remorse; and remarked that it was her view that whilst there was serious criminality she saw it as something that was done at a critical place in life and understood that this was why Mr Hull had done what he had done, noting that this did not excuse the offending.

Mr Hull was sentenced and was ordered to enter into a 2 year good behaviour bond in the amount of $200 with nil conviction to be recorded pursuant to Section 19B(1)(d) Crimes Act 1914. Magistrate Milledge noted that no restitution order would be made as this was being taken care of.

The matter was prosecuted by the Office of the Commonwealth Director of Public Prosecutions.;

A dairy farmer formerly of King Island, Dominic Luke Smith was prosecuted in the Launceston Court of Petty Sessions on 24 July 2015 for removing $72,600 from his bank accounts in 2012, prior to and just after the date of bankruptcy.
Mr Smith also failed to keep appropriate books and records relating to his business transactions for five years prior to his bankruptcy and failed to disclose information as required by the trustee. Mr Smith was not able to account for how he spent a $100,000 loan and failed to produce bank account statements and cheque butts when requested by his bankruptcy trustee. Mr Smith pleaded guilty to 15 offences under the Bankruptcy Act and was sentenced to a total effective sentence of 4 months’ imprisonment, released on a $1,000 two-year good behaviour bond. The matter was prosecuted by the Office of the Commonwealth Director of Public Prosecutions.

A NSW woman has pleaded guilty to gambling away more than $137,000 from the sale of her property rather than paying creditors before declaring bankruptcy with debts of $438,000. Dee Why resident Bridgett McElwaine was sentenced in the Downing Centre Local Court on 12 May 2015 after pleading guilty to an offence against the Bankruptcy Act. Ms McElwaine filed for voluntary bankruptcy in October 2012 with debts of $438,000 mostly from the use of 22 credit cards. Before her bankruptcy, Ms McElwaine had received proceeds of more than $137,000 after selling her property in Frenchs Forest, NSW. She withdrew more than $96,000 in the 12 months before her bankruptcy and told the court she ‘blew the lot’ on gambling instead of making the money available to her creditors. In sentencing Magistrate Goodwin noted a jail term was available for Ms McElwaine’s serious offence and that a clear message needed to be sent to the community about the unacceptable nature of that behaviour. Ms McElwaine was convicted and placed on a nine-month good behaviour bond, recognisance of $500 and to accept Community Corrections Service supervision. The case was prosecuted by the Office of the Commonwealth Director of Public Prosecutions.Media release NSW (McElwaine) – Nine-month bond for offence against the Bankruptcy Act