” Working at the coal face of insolvency and restructuring, our members have a unique view of the effectiveness of our legislative framework in restoring the economic value of underperforming businesses. For the optimum operation of markets, it’s vital that their expertise is utilised to ensure our legislative framework is the best that it can be.”

This statement from the Australian Restructuring Insolvency and Turnaround Association (ARITA) – the professional body to which most insolvency practitioners belong – accompanies publication (14-10-2014) of its discussion paper on dealing with corporate financial distress in Australia.

ARITA says that its discussion paper – “A Platform for Recovery” – identifies seven current issues in the insolvency regime and proposes law and practice reforms to remedy them.  The paper’s Executive Summary is as follows: 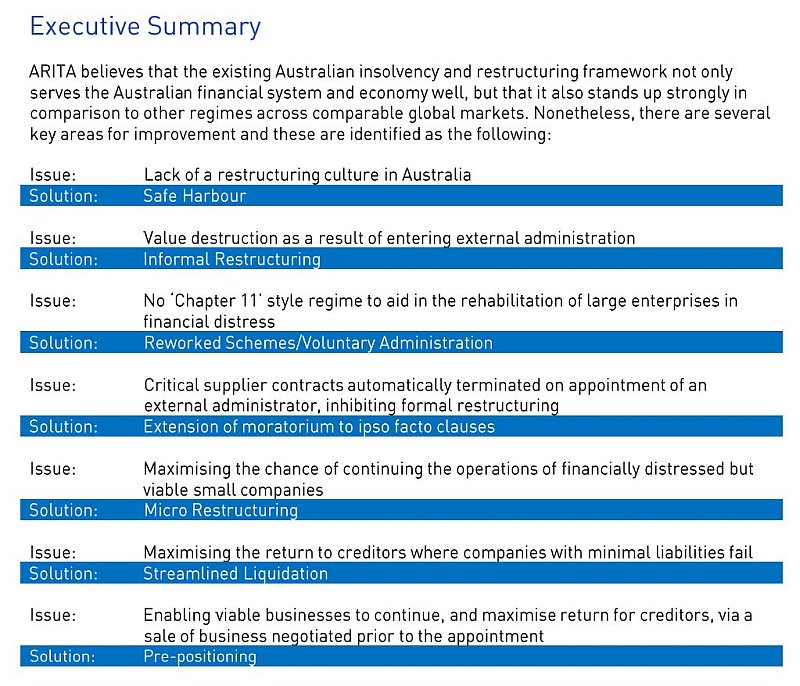 The following are further statements made by ARITA on the launch its plans:

“As Australia’s insolvency and recovery professional body, we must have a clear and well-articulated policy position across the full gambit of issues that we cover, that all key stakeholders are aware of.  Our new discussion paper … identifies seven current issues in the insolvency regime and proposes law and practice reforms to remedy them.  The discussion paper does not go into the detail of specific legislative change, but concentrates on concepts and their merits …. The goal of the discussion paper is to stimulate active and informed discussion of the issues that are raised. This will inform ARITA’s final policy position …. A foundation of our thinking is that the current “one size fits all” approach to dealing with companies in financial distress is flawed.”

A copy of  A Platform for Recovery may be viewed and obtained at this location on the ARITA website.

ARITA is inviting contributions to the debate. To go to their discussion forum, go to ….   www.arita-forums.com.au

The Federal Court of Appeal has dismissed an appeal by the Australian Taxation Office against a court ruling that where a tax assessment has not been issued liquidators have no obligation under s 254(1)(d) of the Income Tax Assessment Act to retain from the proceeds of sale an amount sufficient to pay an apparent Capital Gains Tax liability . (Judgment dated 8/10/2014, Commissioner of Taxation v Australian Building Systems Pty Ltd (in liq) [2014] FCAFC 133.)

The liquidators of Australian Building Systems Pty Ltd entered into a contract of sale of real property in Creastmead, Qld. The ATO argued that a tax liability for the capital gain arising from the sale arose when the sale occurred, and, accordingly, on receipt of the proceeds of sale, the liquidators were obliged under s 254(1)(d) to retain from the proceeds of sale an amount sufficient to pay that tax liability regardless of whether a tax assessment had been issued.

A couple of years ago the Australian Restructuring Insolvency & Turnaround Association (ARITA) (then the IPAA) and the ATO decided to run a test case on the obligations of liquidators upon the occurrence of a CGT event. 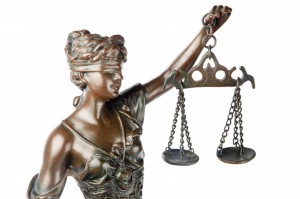 The decision in the first instance by Justice Logan of the Federal Court (in March 2013) has been confirmed by Justices  Edmonds, Collier and Davies.  Davies J summed up the decision as follows (paragraphs 34 and 35):

Interestingly, the appeal judges did not comment on Justice Logan’s cautionary advice to liquidators at the first hearing, which was: