Several years ago an external administrator (Paul Gidley) went to the Federal Court for advice on the validity of resolutions passed approving his remuneration prospectively (i.e. ahead of the work being performed).  It was a treated as test case, and in it he was supported by the Insolvency Practitioners Association of Australia (IPA) and opposed by the Australian Securities and Investments Commission (ASIC).

The judgment of Justice Gyles favoured the external administrator and opened the way for liquidators and other external administrators to have their remuneration “fixed by reference to a formula based upon time, provided that the formula is objective enough to satisfy the test laid down by the High Court ….”  He decided that “the resolutions in question in this case are capable of objective application. All of the necessary elements can be objectively identified. The person doing the work, that person’s category and the period spent are all the elements required. The sum can be calculated or ascertained definitely….” (Gidley re: Aliance Motor Body Pty Limited [2006] FCA 102).

Now the IPAA has drafted two examples of alternative resolutions that it believes meet the test in situations where the external administrator seeks prospective (future) remuneration that allows for the increase of hourly rates. See IPAA release 17 December 2013: Prospective remuneration approval – Increase in hourly rates

The sample resolutions are:

In providing these examples the IPAA says:

“The Third Edition of the IPA Code of Professional Practice (effective from 1 January 2014) provides further clarification that hourly rates can only be increased where an objective formula is approved by creditors as part of the resolution …In practice this means that, should a practitioner wish to adjust their hourly rates, they must include a definitive formula in the resolution – a resolution which refers to an increase “from time to time” or similar is not acceptable.  The IPA also considers that a resolution that refers to increases of “up to X%” does not meet the definitive requirements of the Gidley decision.  Should practitioners wish to be able to increase rates during the period of a prospective fee approval, they should consider resolutions which refer to increases of X%pa or in accordance with CPI. “

There could be several reasons for this variation, or it may simply be a blip. Next year’s statistics will be interesting.

The chart below, prepared exclusively for this blog using ASIC statistics, compares the trends from 2007/08 to 2012/13 in the numbers of  corporate insolvency appointments, companies entering external administration and Schedule B investigation reports filed with ASIC. 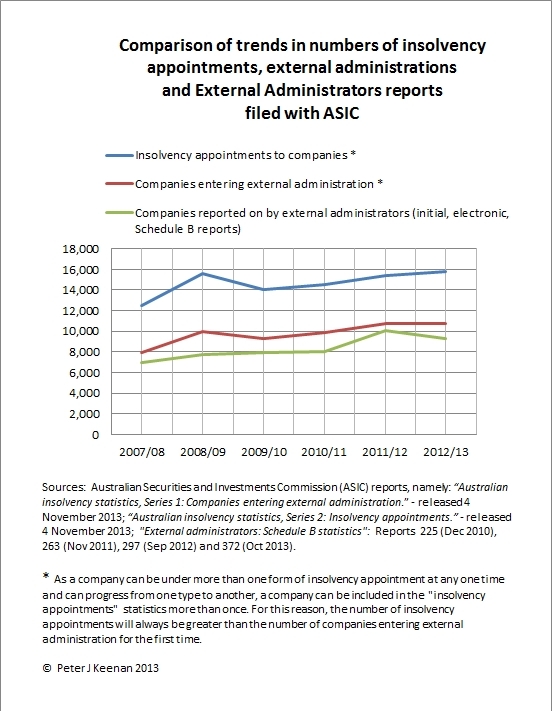 ASIC does not appear to have commented publicly on the variation.

The following extracts from ASIC’s Report 372 (October 2013) give some general information about Schedule B reports:

“Liquidators, receivers and voluntary administrators (external administrators) must lodge reports under the following sections of the Corporations Act:

External administrators must lodge a report with ASIC as soon as practicable:

(a) when they suspect an offence under an Australian law, or instances of negligence or misconduct relating to the company to which they are appointed; or
(b) in the case of a liquidation only, when unsecured creditors are unlikely to receive more than 50 cents in the dollar dividend.